Aarathi at a Daughters of Tomorrow event

In part 2 of this International Women’s Day series, we focus on Georgette Tan and Aarathi Arumugam. Their work brings awareness and action to issues like gender disparity, women's health and workplace discrimination for pregnant women. 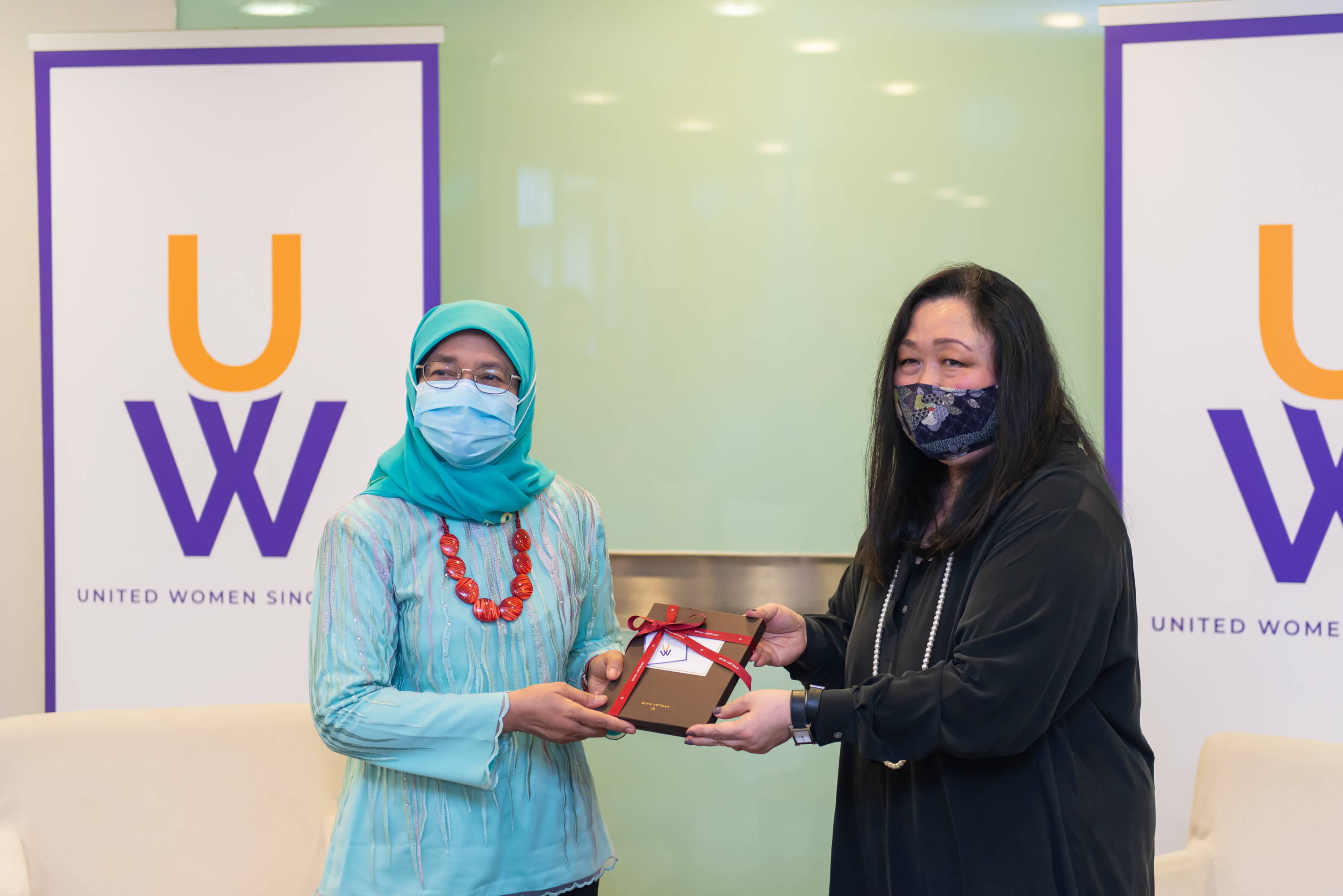 Georgette Tan, at a dialogue session with President Halimah Yacob.

As Senior Vice President, Communications, in Corporate Social Responsibility at MasterCard Asia Pacific, Georgette saw the value of partnering with the public and private sectors and civil society. In particular, she wanted to contribute towards women's empowerment and gender equality and aligned them with the business and organisation's core values.

Deeply committed, she got involved with UN Women Singapore, learning how to contribute to the business and the cause, and eventually became the president. After UN Women Singapore’s exit last year, she became United Women Singapore's president, working together with other women’s organisations, networks and beneficiaries. Georgette finds the work tiring but rewarding and greatly appreciates her amazing, energised team.

She currently sits on BoardAgender’s board, aiming to increase the number of women on boards and on the Taskforce on Family Violence. This taskforce is jointly led by the Ministry of Social and Family Development and Ministry of Home Affairs. Georgette also has two young adult daughters who constantly amaze her with their achievements. 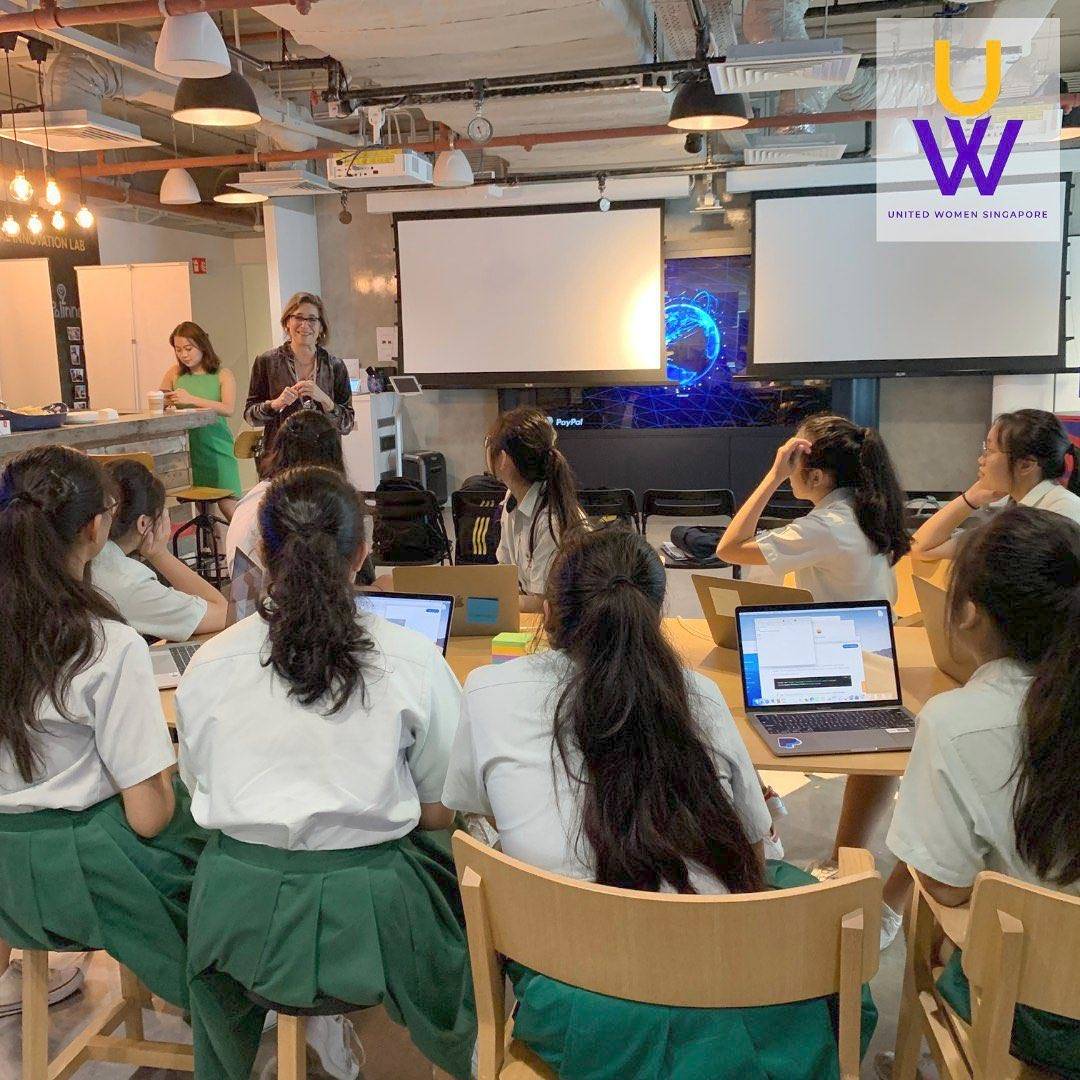 Girls need to have access to education, opportunities and familial support to close the gender gap and pursue STEM careers.

At the prevailing rates of progress, the World Economic Forum predicted it would take 257 years to close the economic gender gap. To do so, Georgette says girls must have access to education and opportunities.

The research by United Women Singapore and Agility Research & Strategy revealed three reasons why girls are less likely to pursue a STEM career. First, 38 per cent of the girls felt they were less qualified for a STEM career; this could indicate a lack of confidence rather than competency.

The results also found the girls felt their families were less supportive of them pursuing such careers. Hence, the Girls2Pioneers programme helps remind girls that they are as good as boys at STEM subjects. It also showcases future opportunities and connects girls to female role models and mentors.

Before the pandemic, Georgette shares, “It was much easier. We could go into schools, run camps and workshops with bigger groups.” Older girls could also visit companies like Google and Unilever and immerse themselves and talk to women in these roles. Currently, they hold webinars like DiscovHER at the Science Centre in January. This year, United Women Singapore plans to launch a programme to match girls with female mentors.

Girls also need equal access to opportunities like internships, apprenticeships and job shadowing. Today, many corporations are using blind hiring so they are unaware of the applicants’ genders and want a balanced slate of candidates. However, Georgette stressed that women must actively step up to the challenge. They can get extra training, exposure, join clubs and associations, network, write articles and get published. She says, “All these things are very important in terms of the pathway to progress.

Georgette recommends starting boys early on understanding the value of women in all aspects of life. Hence, she says, “They grow up appreciating these women.” This is vital when tackling domestic violence. Police reports relating to family violence increased by 22 per cent from April 7 to May 6 during the Circuit Breaker period. Family members did not have their usual outlets to express their frustration and many lost their jobs or had reduced income.

Although there are men who are the victims, most commonly, it's women, older family members, foreign domestic workers, and those with disabilities and children. Hence, Georgette says that it's vital that boys understand women's value from an early age. As the boys grow up, they can help to break the cycle of violence.

Through workshops and sessions, the Boys Empowered programme will educate them on topics like healthy masculinity and understanding consent. Male allies can also be extremely helpful for women. For example, Georgette says, “Men can sponsor women, clear the way for them and introduce them to their network, and provide them opportunities. They can play an incredibly important part in helping women on this pathway to prosperity.”

For working mothers, understanding, engaged and enlightened employers certainly help. Many large organisations adopt best in class practices and realise that it’s about employee welfare. Georgette recommends that companies give working mothers “the tools, access, flexibility and support to work wherever they need, be it the home or office.” These days, many organisations provide coaches and services that help with mental wellness for employees working from home. Georgette says, “Having that as a service for staff, particularly for women, I think that’s very, very helpful.”

Aside from having the office infrastructure be friendly and able for new mothers, it’s also essential to have programmes, networks and organisations to support them in the work and non-work front. This year, the Ministry of Social and Family Development celebrates SG Women, recognising the various roles women play on the political front, the country and common level, and business. She says, “We need to encourage more women founders and entrepreneurs to choose that they want to run their own businesses, and hopefully employ other women to give them equal opportunities.” That’s where the multiplier effect will come into place.

Aarathi Arumugam, Owner and Founder of the Party Elves 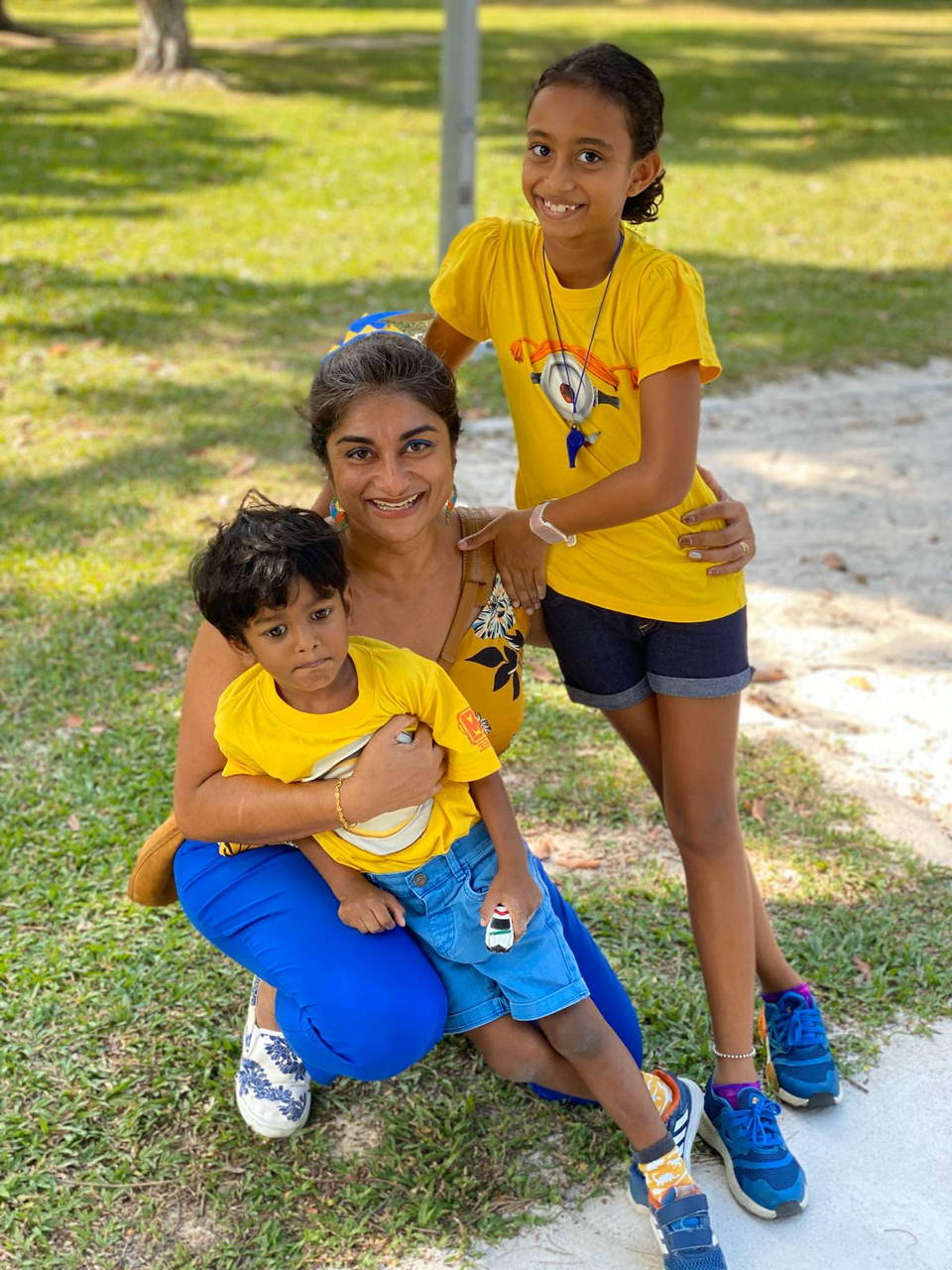 Aarathi with her two children, aged ten and five.

Owner and founder of The Party Elves, an events company for children and the community, Aarathi has to ensure that her small team executes the events and partnerships well. With the pandemic, they shifted gears and produced Busy Boxes instead. Kids can work on the craft materials and ideas within these themed boxes, which have become popular party favours. Also available are party-specific boxes like a foosball Busy Box. Currently, they are planning to develop one based on the children's storybook about a runner, Go Shanti Go! She has also helped venues and restaurants with smaller in-house promotions.

She is also the President of the Malaysian Association in Singapore, a networking organisation for Malaysians in Singapore. Aarathi leads the team to bring interesting events and benefits to its members. For example, they have supported their fellow Malaysians who are away from their families at Singapore’s standard of living. As treasurer of AWARE, she supports the organisation in progressing with its mission. While these roles are quite involved, she has a lot of support from the other board and committee members. Aarathi has also become better at leading and learning to let others take the lead and appreciating their efforts. 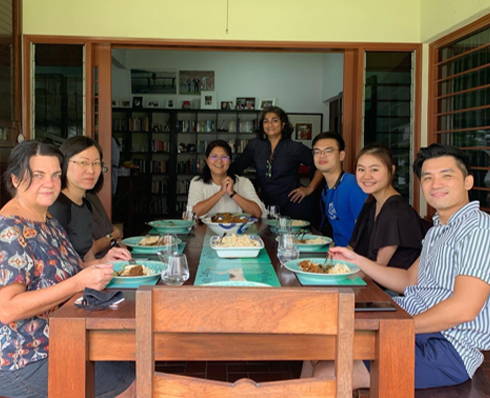 Kitchen Movements partnered with Makan My Curry, promoting home cooking and getting families in the kitchen.

Kitchen Movements managed to do a virtual challenge series last year, and a children’s cook-off partnering with Playeum. It has also partnered with the non-profit organisation My Community on a small scale event called Makan My Curry. This year, they will keep supporting Daughters of Tomorrow by raising awareness about their campaigns and work. They will also work with Makan My Curry to promote home cooking, local produce and getting families in the kitchen. Aarathi says, “I am planning a few projects which I can’t yet reveal. Hopefully, in 2022 we will have a chance to revive the events at a larger scale.”

Findings from 2019 Trip with eXXpedition 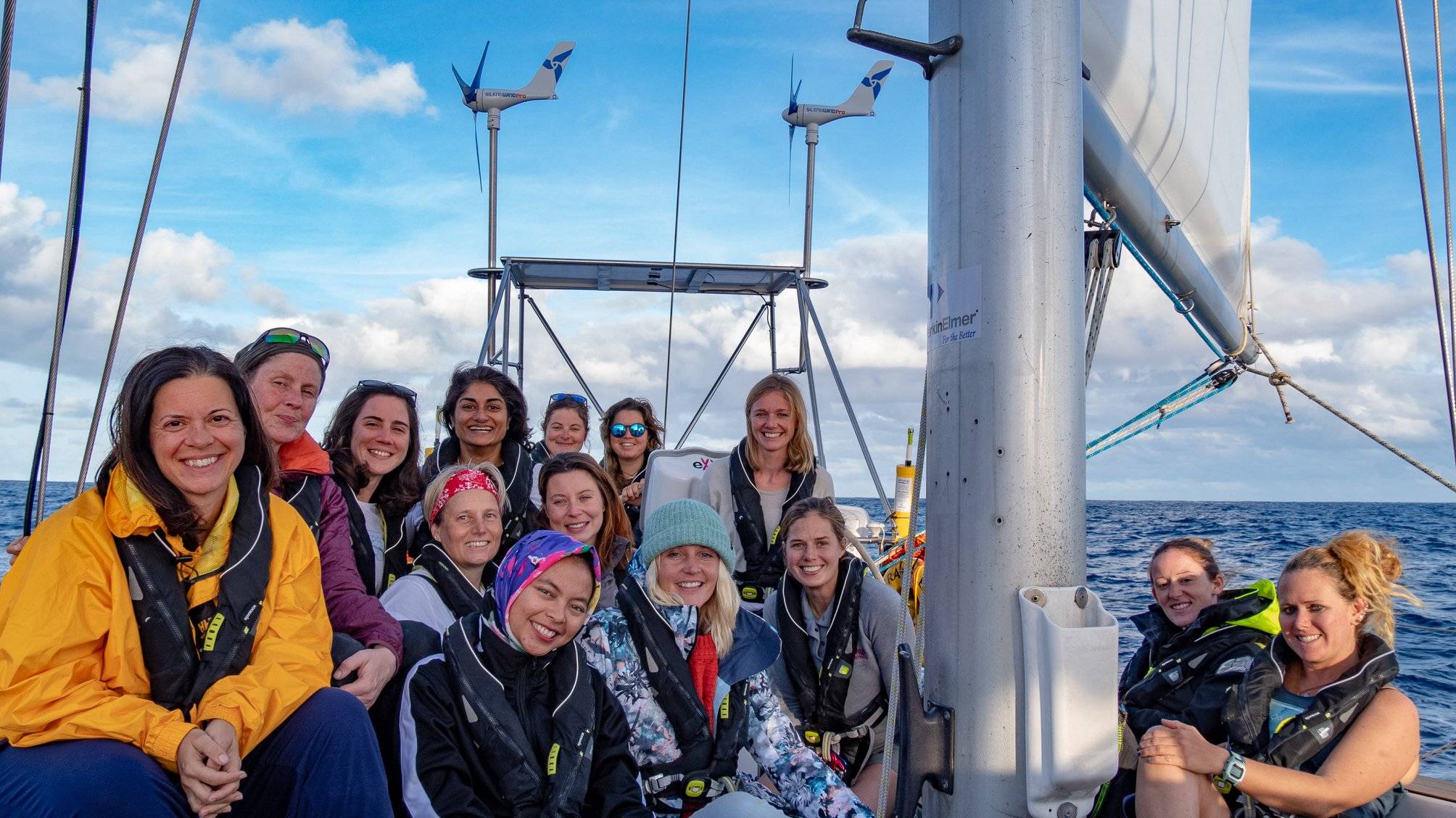 In 2019, Aarathi sailed with an all-women team on a 10-day voyage with eXXpedition to experience the damaging impact of plastic waste and toxins in our oceans. Loads of plastic nurdles used in manufacturing and other plastic waste ended up in the ocean, including microplastics which leach into the fish and marine life.

Aarathi and her team found that chemicals like Bisphenol A (BPA) can mimic oestrogen. These chemicals interact with receptors, leading to cell proliferation and migration that may contribute to some cancers. She says, “It can also interfere with the natural production and function of natural hormones, causing the elimination of some of these hormones. This may adversely affect reproduction and other ‘natural’ functions.”

Originally, polyethylene terephthalate (PET) plastic bottles were thought to be safe. However, when heated, they leach out compounds that interfere with the hormones' natural functions. Aarathi adds, “Much of the plastic that we found in the oceans during our expedition contained PET”. While convinced there is a correlation between women's health and plastic, she says “the research is still very grey.”

Having gone through several rounds of assisted reproductive technology, Aarathi has some advice for women with the same difficulties. She says, “It’s so easy to say, ‘Talk to someone about it’, but it is the hardest thing to speak up about.” She recommends equipping yourself with enough knowledge to find out about the specific issue. Next, get familiar with all the options, cost, side effects and what it would mean to your body. She says, “Knowledge always helps.” It is also important to find a gynaecologist who can also empathise with the emotional side of undergoing such treatments. Aarathi also recommends getting a second opinion and asking for mental health help.

Next, gather your tribe - even if it’s just one person - and then act upon it. The decisions may change over time, but ensure that both you and your partner are getting support. While you may be going through the invasions and procedures, your husband may feel left out. She says, “Empower each other - get support where you see you need it, and then move forward together.”

Aarathi feels that “employers need to stop being so fearful of the bump”. She says, “Mothers often get more done because they just become more efficient.” To change this, it starts from the top. For instance, how bosses talk about those going on maternity leave in the pantry and how they treat someone who has to leave on time. The discourse from the top must be inclusive and accepting that life goes on after a baby, just as it would with a surgery or fractured limb. Then, Aarathi says, "the workplace will be a much easier place to adjust to."