Playing with toys like blocks can stimulate your child’s development and improve their intelligence.

Aside from providing your little ones countless hours of fun, these smart toys and resources also nurture your children's cognitive development. As they interact with these toys, they acquire critical skills like language, thinking, memory and reasoning.

During your baby's infancy, aid them in their cognitive development by talking, reading and singing to them. At this stage they'll develop their listening and comprehension skills and learn the names of people and things. Thus, activity gyms, musical toys and rattles can be great aids to boost their brainpower. 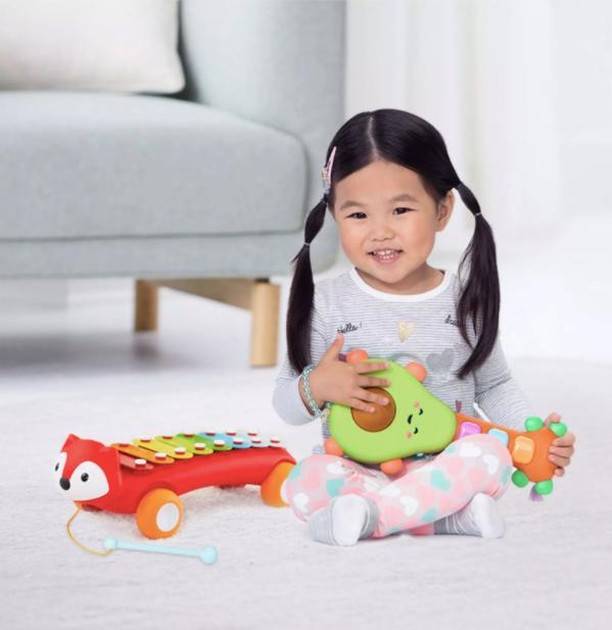 Whether music is sung or played, it aids babies in nurturing their critical thinking, language and listening skills.

First, musical toys can promote your baby's problem-solving and critical thinking skills. A study by scientists at the Institute for Learning & Brain Sciences showed differences in babies' auditory and prefrontal cortexes after they listen to music. Hence, even in short doses, exposure to music helps babies get smarter, improving their language development, speech, reading and listening skills. One way is to place a mobile above the crib, so the music and high contrast colours capture his/her attention and stimulate his/her cognitive development. Two options are the Mellipou Baby Bed Musical Mobile and the Taf Toys Musical Garden Mobile ($159 and $79.90 respectively). 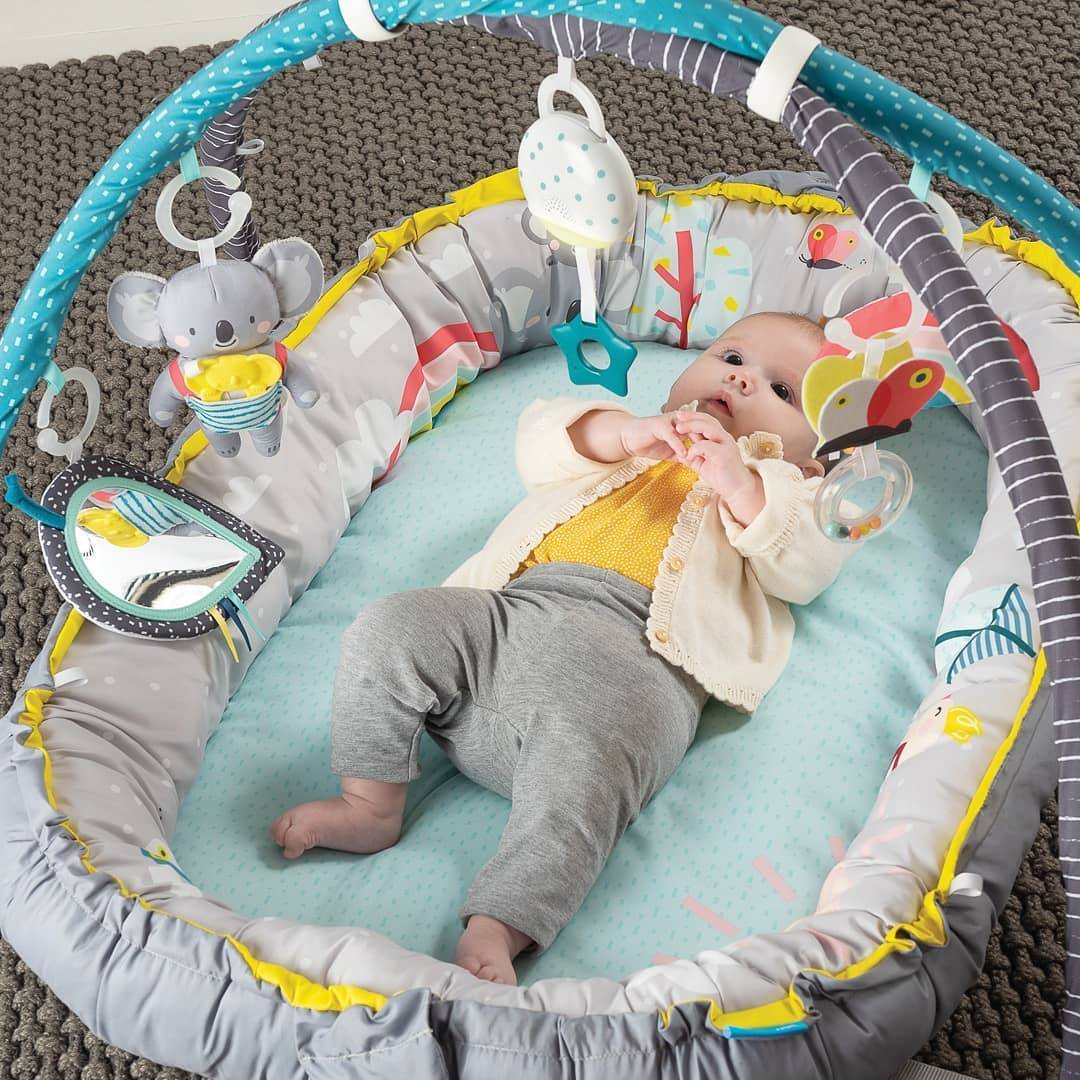 With this gym, infants can engage in 12 developmental activities which assists them in learning cause and effect and identifying patterns, shapes and sounds.

Perfect for babies, Taf Koala Musical Cosy Gym ($139.90) functions as a cosy mat, interactive gym and a tummy time helper, with 12 developmental activities for play and exploration. While your little one immerses him/herself in the various activities, the musical unit stimulates his/her brain.

Playtime lets your infant learn cause and effect, and identify patterns, colours, shapes and sounds. Additionally, the gym can also enhance his/her natural curiosity, aiding him/her in problem solving and critical thinking later on. With your help, he/she can also learn language and communication while playing. 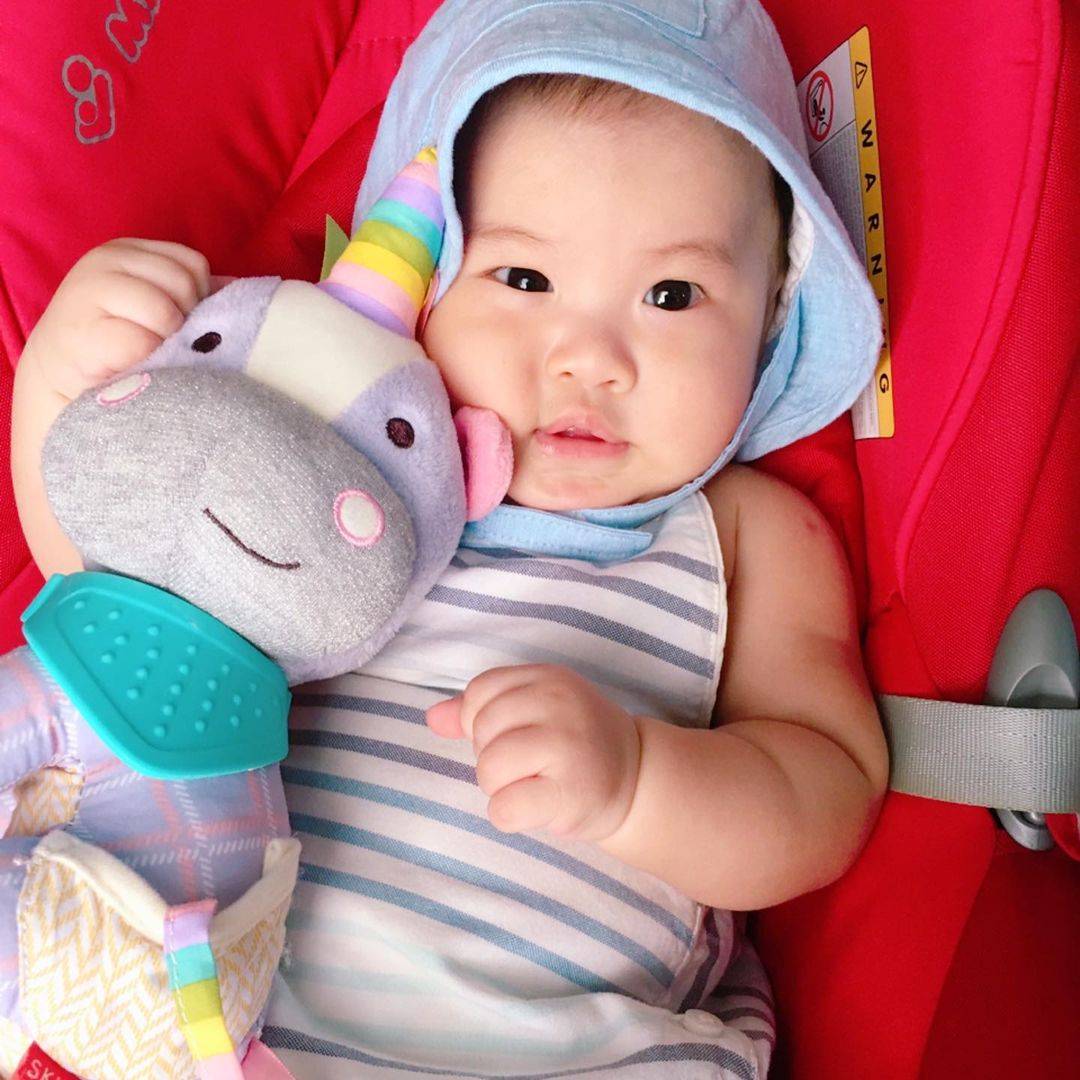 Infants can explore various textures, sounds and patterns with this multi-functional Bandana Buddy, as well as soothe aching gums.

Such toys help your infant's cognitive development by helping him/her focus on objects within his/her field of vision and track them as they move. Other concepts that your infant learns are cause and effect, object permanence and imitation. Try the Skip Hop Bandana Buddies ($31.41), which are soft toys and teethers with textures, sounds and patterns for little ones to explore. Detach the teether toy for quick access or attach the whole toy to the stroller, car seat or infant carrier.

Your child will gradually be able to understand two to three-step instructions by three years. Also, he/she should be able to identify pictures of things when named, and recognise familiar people and body parts. From mimicking speech sounds with tonal changes, he/she will soon be able to make two to four-word sentences, repeat words, name familiar items, and use simple pronouns and plurals. He/she should also be able to state his/her name, gender and age.

Other cognitive development milestones include finding things, sorting shapes and colours, completing sentences and rhymes in familiar books. He/she should also be able to build towers with four or more blocks, and play with more complex toys involving buttons, levers and moving parts, three or four-piece puzzles and engage in make-believe play. 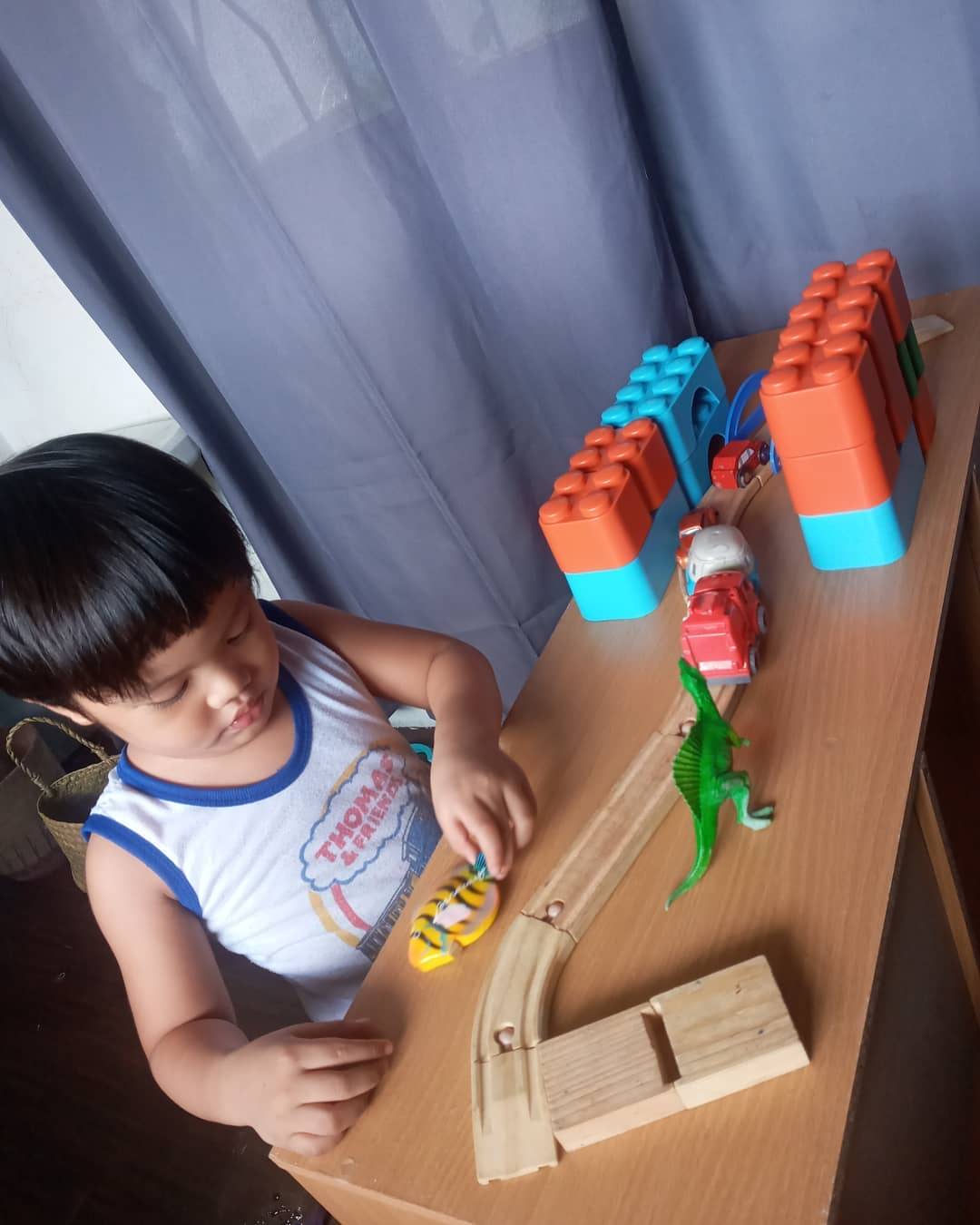 Great for open-ended play, the award-winning Green Toys Block Set ($38.90) is made from 100 per cent recycled plastic, is easy to clean and dishwasher-safe. As they build castles, towers and more, they acquire skills like shape and colour recognition, spatial visualisation, mental rotation, cognitive flexibility, language skills and problem-solving. Engage them during playtime by having them build specific structures and talking about spatial concepts to improve their math and engineering skills. Alternatively, tell them stories and provide them with additional accessories and character toys to fit these structures. 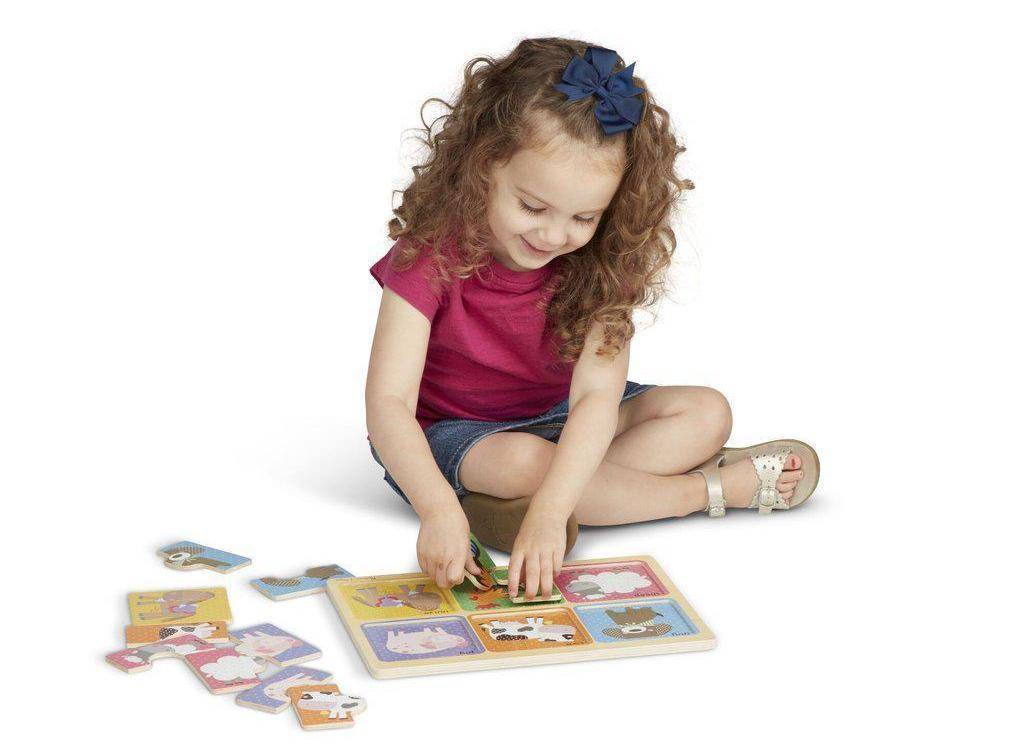 Start your toddler on simple four-piece puzzles to build their problem-solving skills.

Puzzles aid your toddler's cognitive development by improving their problem solving skills, memory, concentration and language. They'll need to recognise the different pieces by colour, size and shape to complete the puzzle. Enhance their learning by asking them to identify objects, count objects or describe their actions.

Start them on the four-piece Melissa & Doug Natural Play Wooden Puzzle ($17.90), featuring four to six pictures of wild and farm animals. The board and pieces, using recycled materials and soy-based inks, can be stored in a case with woven rope handles. 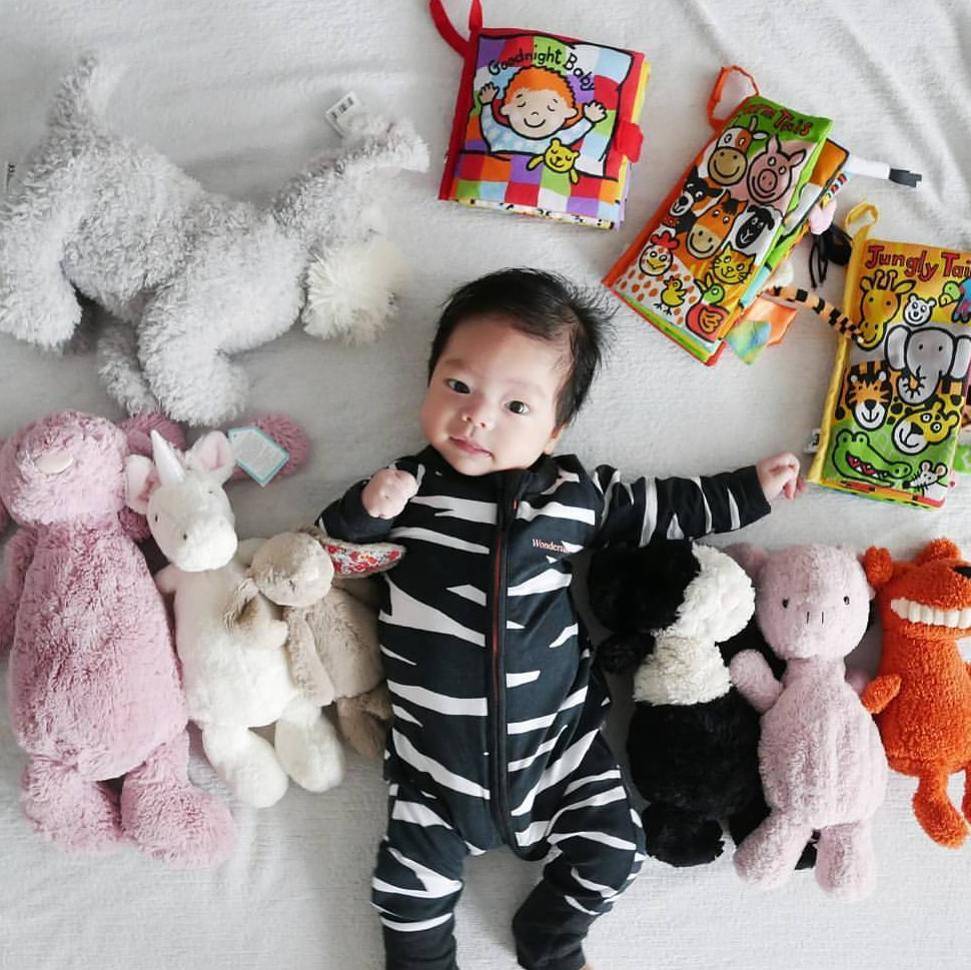 Read books like the Jellycat Jungly Tails to your little one every day to encourage future independent reading, improve his/her concentration and enhance his/her natural curiosity.

Reading daily to your toddler sets him/her up for independent reading and learning language quickly. It also enhances his/her natural curiosity and imagination and introduces new ideas about the world. Other benefits include improving his/her concentration and emotional intelligence.

Choose interactive books like the Usborne Wind-Up Busy Car Book ($42.90), featuring a little red car that makes its way around the four different tracks. Others include the DK - Touch and Feel and Jellycat Tails series ($12.50 and $32.90 respectively) with different textures on the pages.

Preschoolers will be able to think about objects and people even if these are absent, and events in the past and the future. Hence, they can also anticipate the physical consequences of their actions, and understand cause and effect. Furthermore, they may talk to themselves to control their behaviours, and vocally express their thoughts, feelings and experiences.

During these years, preschoolers will be able to differentiate between things. For example, they will learn that a stuffed animal is not a real animal. They'll learn by imitation, observing, exploring, creating and asking a lot of questions. They may also start to understand spatial concepts. 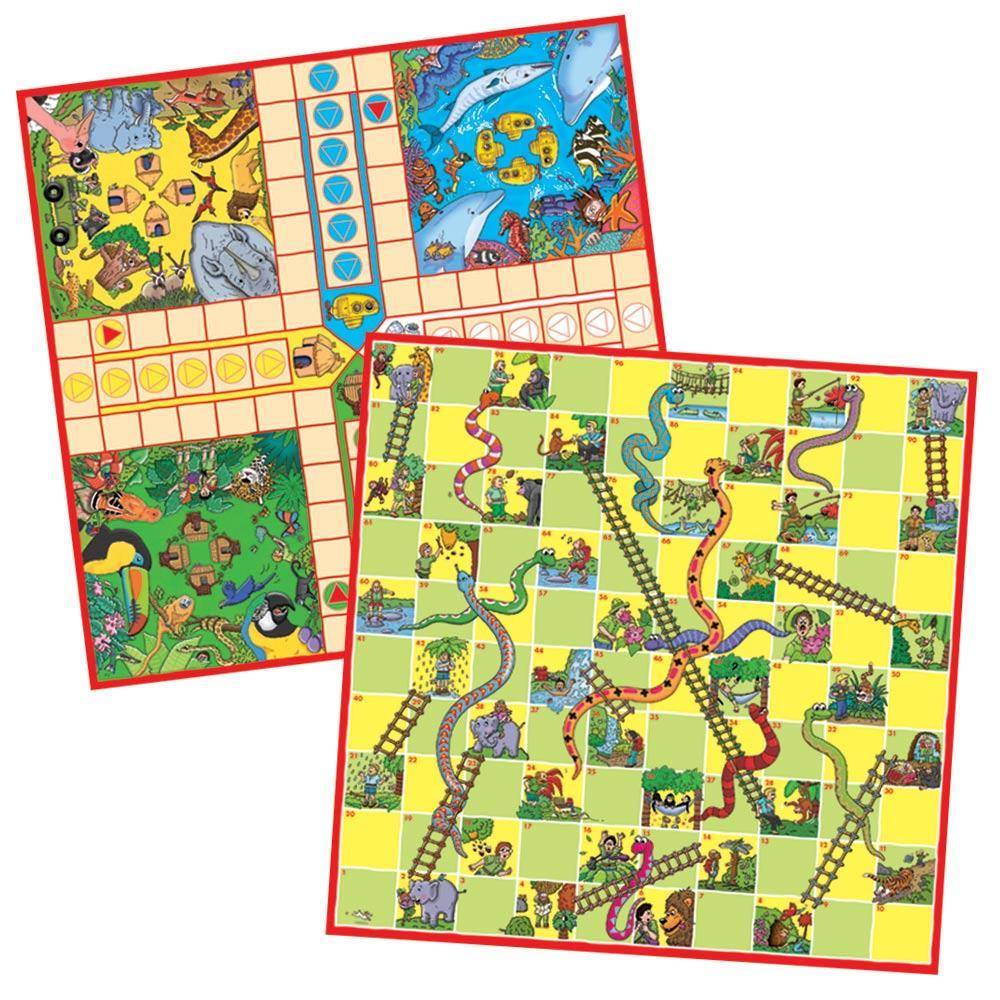 Board games assist preschoolers in building their communication skills, as it forms a basis of conversation that can springboard to other topics.

Try playing the classic Snakes and Ladders and Ludo board games. Galt’s version ($23.90) is beautifully illustrated with animals like the elephant and snakes in Snakes and Ladders. In Ludo, make your way around the board set against the Arctic, African Plains, Tropical Rainforest and the Coral Sea. This comprises a double-sided playing board, counters, dice, shaker and guide.

Otherwise, let your child beat the challenges in Smart Games Sleeping Beauty and Little Red Riding Hood’s puzzles ($39.90 to $49.90). Aside from playing as the protagonists, he/she can also be the Big Bad Wolf or the dragon, with an opposing objective - block Sleeping Beauty and the prince, or get to the grandma’s house first. 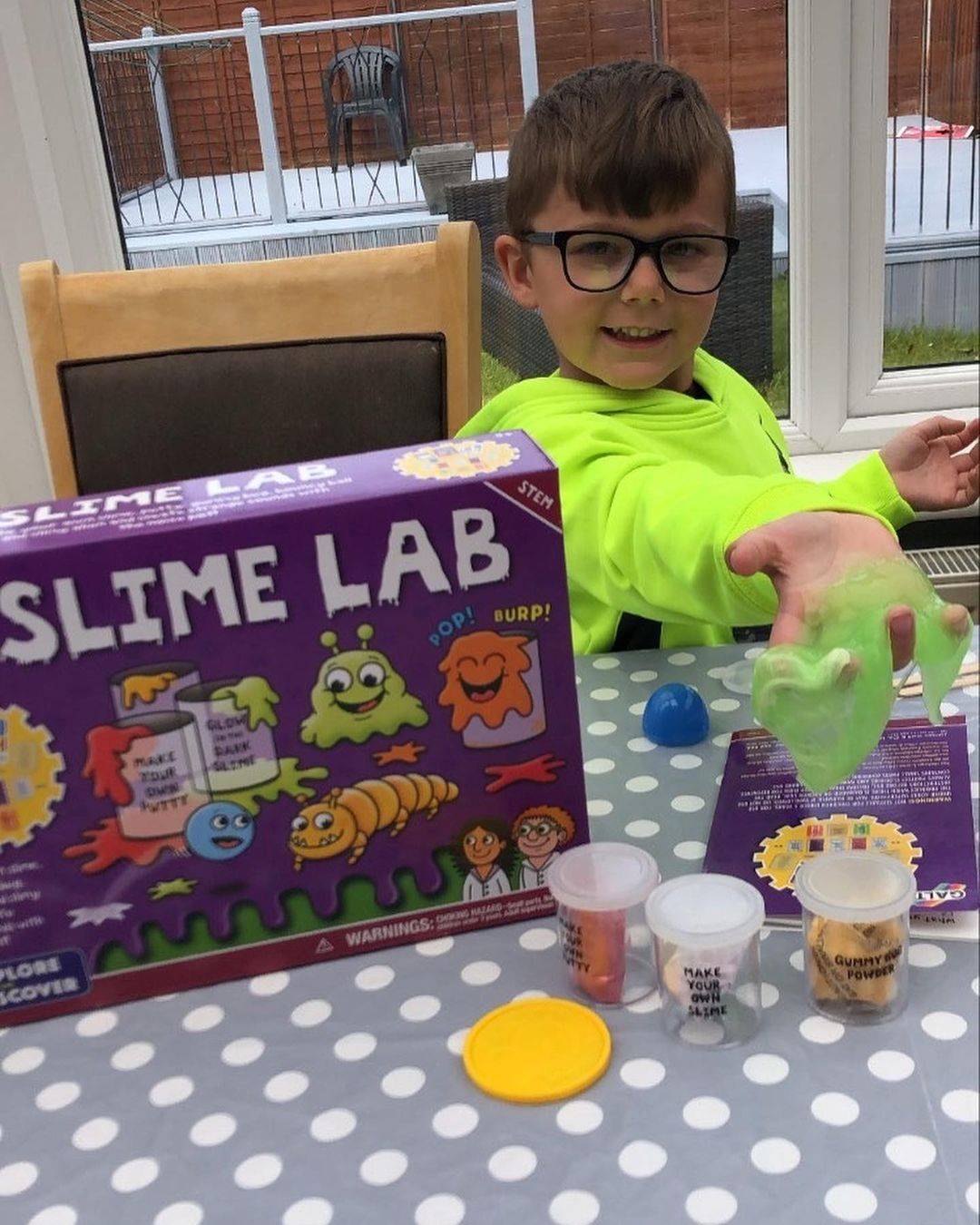 Your child can try making a cool glow in the dark slimy alien with the Slime Lab kit.

Engage your five-year-old in a series of exciting science experiments with these kits from Galt. He/she can dig up dinosaur fossils, make dinosaur tracks and learn more about these creatures with the Galt Dino Lab. Alternatively, your child can create a slimy alien that glows in the dark or bouncy putty ball with the Slime Lab and power a clock with an apple using the Kitchen Lab. These award-winning kits ($21.90 each) promote early STEM learning and scientific thinking. 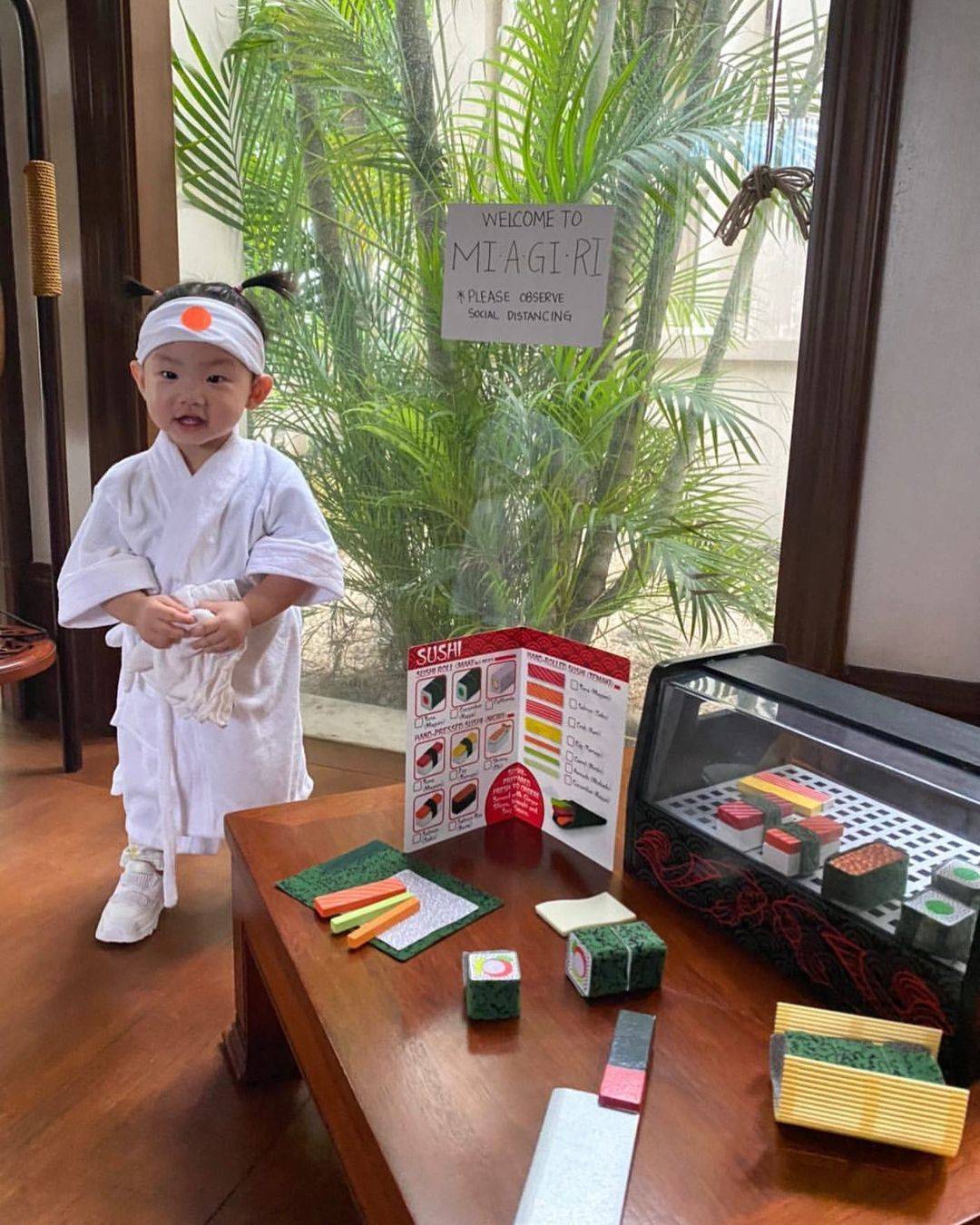 Take pretend play to the next level with costumes to bring the experience to life.

Pretend play allows children to engage their social referencing skills, and aids them in understanding underlying intentions. They can also practice their vocabulary, express their emotions, share their thoughts and learn self-regulation and storytelling for more elaborate and structured narratives. Pretend play may also enhance their problem solving and literacy.

Let your child exercise his/her imagination and the above skills with a trusted companion, the customisable Jellycat ($24.90 to $329.90). Otherwise, he/she can be a chef with the Melissa & Doug food and kitchen sets, or dress up as a mermaid, doctor, pilot or police officer ($24.90 to $399).